Roman Finds Group chose the city of Salisbury as the perfect place to celebrate our 30th anniversary at our Autumn 2017 conference, ‘New Research from Finds from South and South-Western Britain’. Over two days, Salisbury Museum provided a beautiful backdrop to our diverse programme of papers; delegates also enjoyed a private viewing of the Wessex Gallery and the special Terry Pratchett exhibition, as well as a guided tour of Salisbury Cathedral. Sarum College was a wonderful venue for our delegate accommodation and for our celebratory Reception.

It was lovely to see so many archaeologists, finds specialists, Finds Liaison Officers and others at the conference, and Committee was especially pleased to celebrate our 30th anniversary with so many founder and new members. RFG Chair Justine Bayley spoke briefly about 30 years of Roman Finds Group: past, present and future; you can read her words here (coming soon).

As with our last few meetings, it was a sell-out with 85 attendees. Future meetings will secure larger rooms to ensure that we can accommodate everyone wishing to attend

RFG was also pleased to mark this occasion with many interested followers not present at the event; over the course of the seven days around the conference, our Twitter feed received nearly 15,000 ‘impressions’ (views). Committee member Nicola Hembrey tweeted and curated tweets sent by delegates from the event, and was heartened by the huge amount of engagement we attracted with our #rfg2017 hashtag (hashtag analysis is not reflected in the large number above), with many delegates carrying on their lively discussions online after the conference had finished.

All are welcome to our next RFG Conference in Canterbury on 23-24 March, based around the Richborough collections. Booking details will be advertised on Twitter and the website and in Lucerna to members in due course. 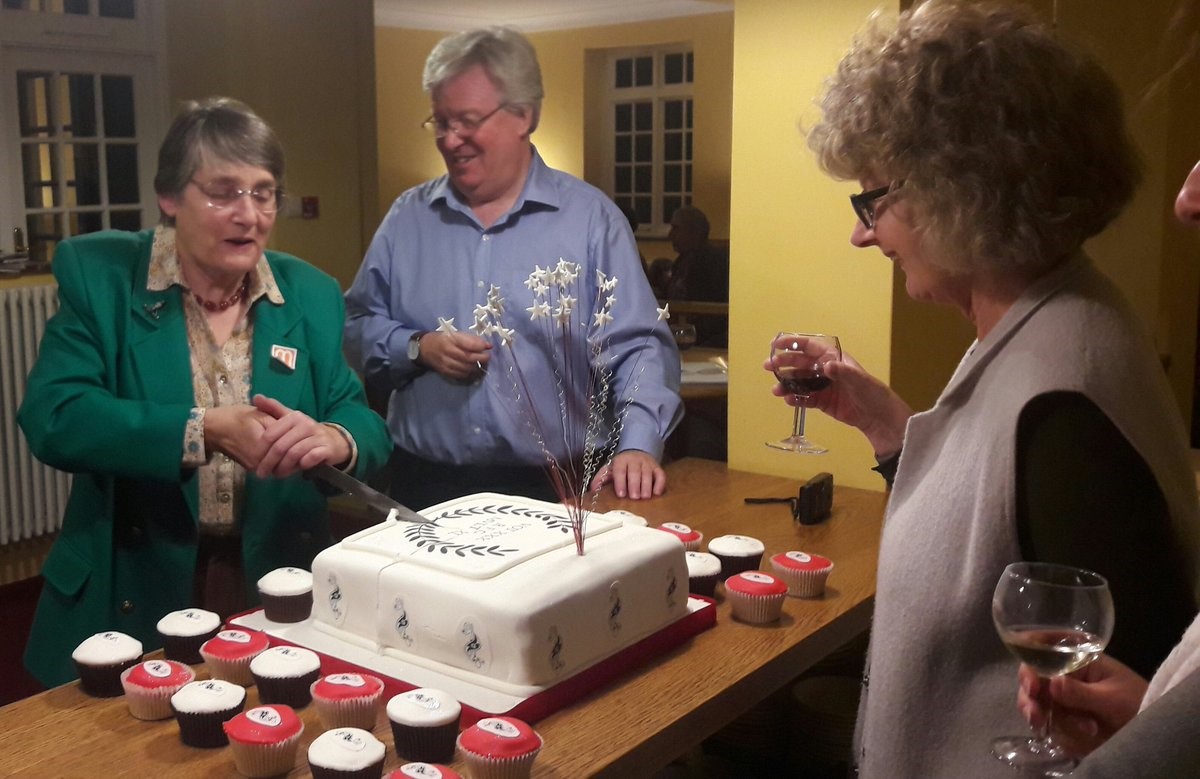 RFG were thrilled to celebrate our 30th anniversary with so many founder and new members. Seen here are Justine Bayley, Stephen Greep and Quita Mould (thank you to Jackie Keily for this photograph) 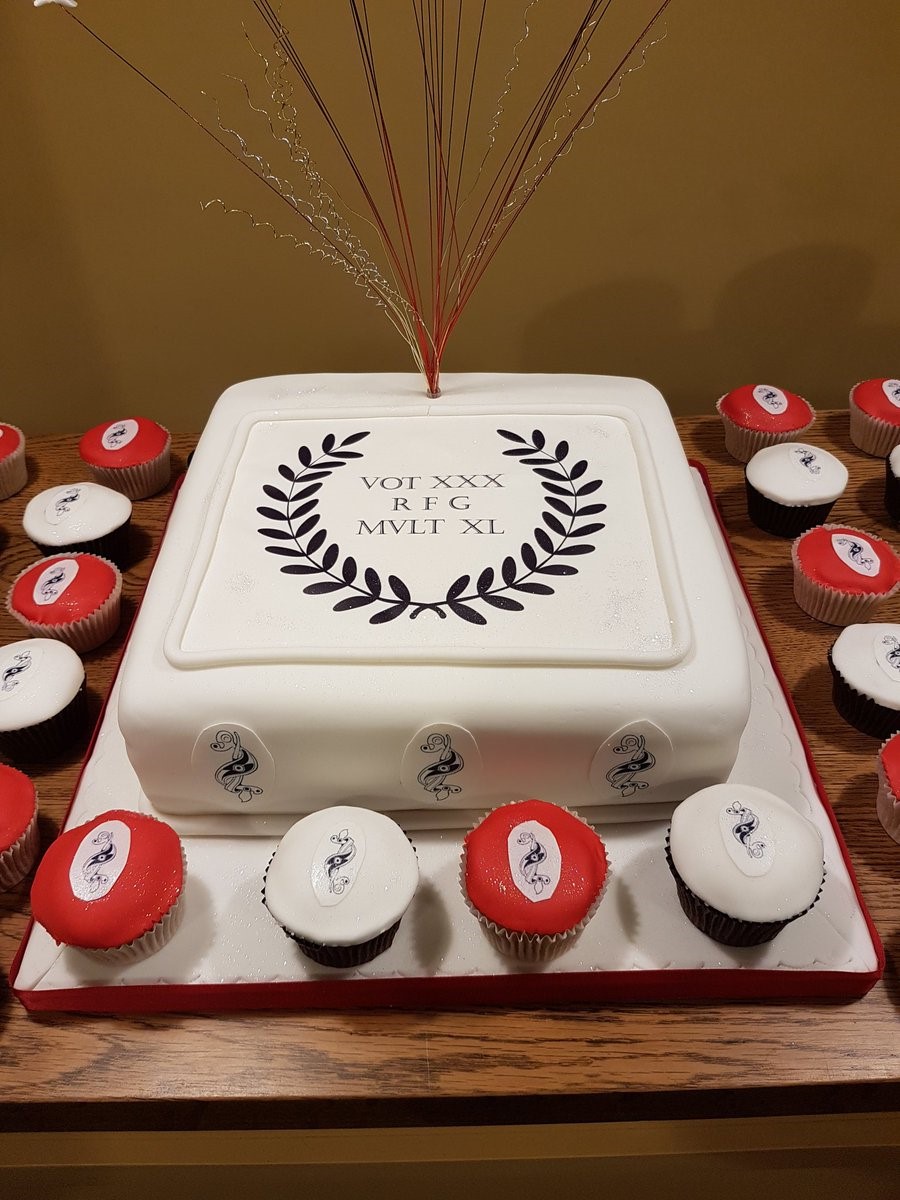 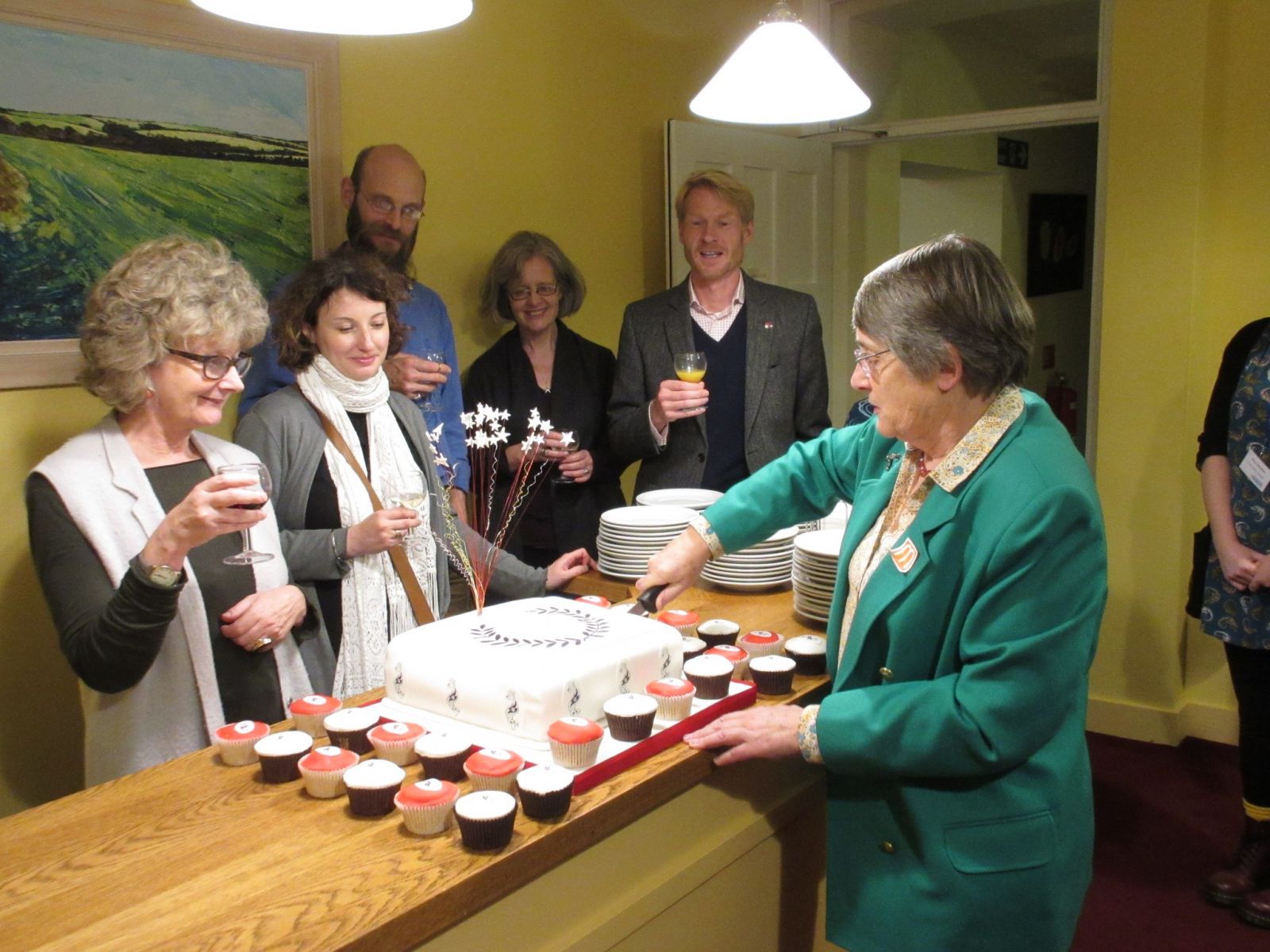 Thank you to Stephen Greep for this photograph 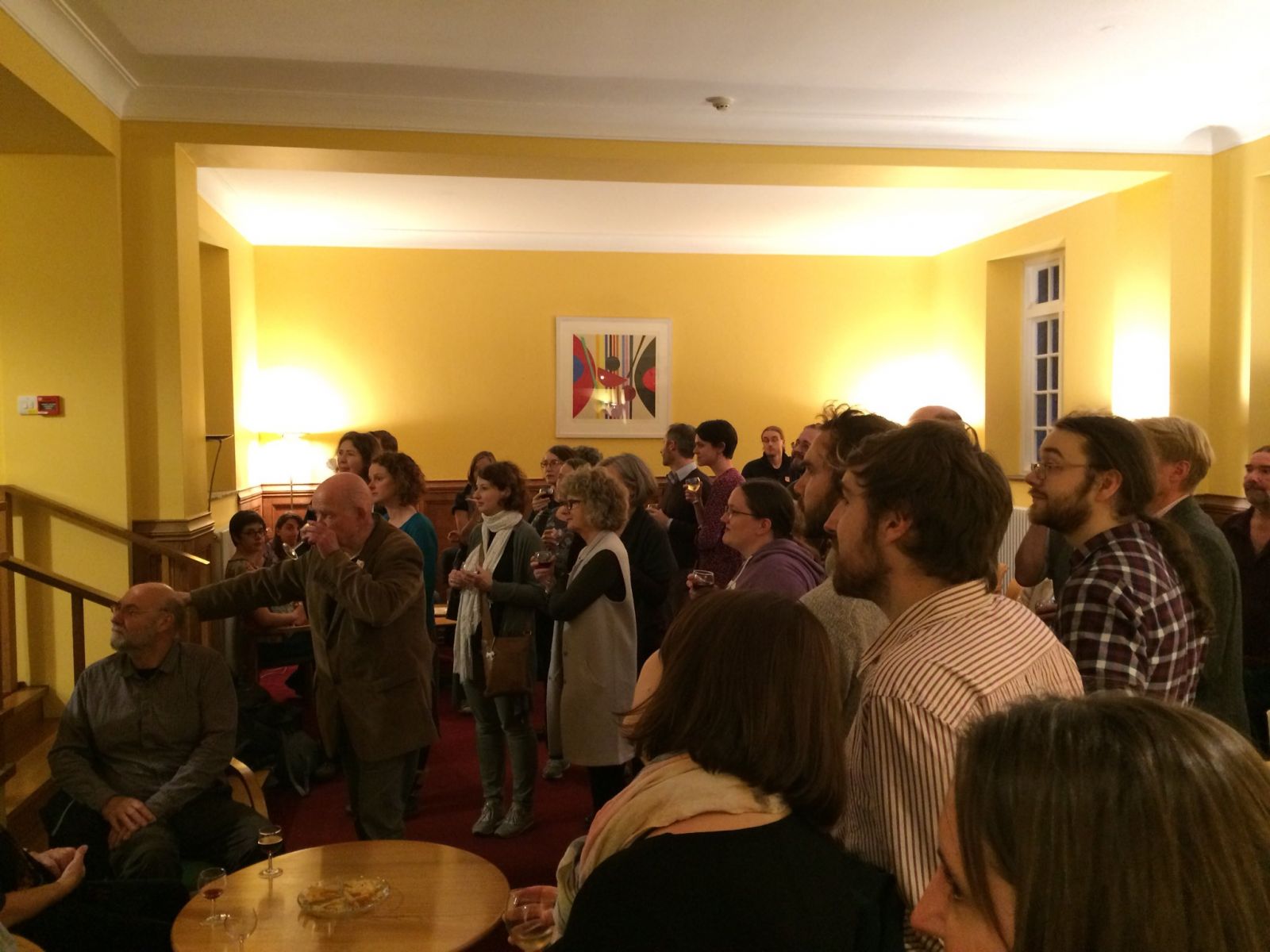 Sorry, this event is now sold out. Click on the link above or visit the meetings page.... Read More »

From 22-28 August 2021 the 25th Limes Congress will take place in Nijmegen, the Netherlands. We would like to invite paper proposals for Session 16: Dress and adornment in frontier communities.... Read More »

Unfortunately the Glasgow conference due to take place on 3rd/4th April has had to be postponed. Our Autumn 2020 meeting resurrect he meeting with as close to the original programme as possible.... Read More »

We are delighted to announce that Roman Finds Group committee member Dr JĂ¶rn Schuster will be offering a one-day Masterclass on Romano-British Brooches with former RFG committee members Dr Hella Eckhardt and Dr Emma Durham from the University of Reading. This one-day event will enhance your skills in the description, identification and dating of Romano-British brooches. You will also learn about the way the PAS records brooches and the research potential of personal adornment for our understanding of Roman Britain.... Read More »

Roman Finds Group chose the city of Salisbury as the perfect place to celebrate our 30th anniversary at our Autumn 2017 conference, ‘New Research from Finds from South and South-Western Britain’.... Read More »

This year the Roman Finds Group is 30 years old. To celebrate, we’ve organised our 2017 Autumn Meeting in Salisbury, where there will be a special reception.... Read More »

The metallurgy of our portable heritage

The metallurgy of our portable heritage study day is being held on Saturday the 17th June, 2017 at the Institute of Archaeology, University College London... Read More »

The theme will be ‘Finds from Southern and South-western Britain’. This is call for papers of around 20 minutes in length.... Read More »

This weekend workshop covers aspects and techniques of archaeological illustration under the personal tuition of Mark Hoyle BA(hon);P.G.C.E.;MAAIS; MIfA. The course will look at general techniques and methods of accurately recording small finds including pottery illustration, metal objects, bone, and leatherwork. There will be a selection of objects from the excavations at Vindolanda to handle and draw over the duration of the course. An archaeological drawing starter pack to use and keep will be provided.... Read More »

Members of the project team and others have produced a series of short papers concerning various aspects of methodological approaches which cover a variety of topics, including one on finds, which can now be viewed and downloaded at http://www.cotswoldarchaeology.co.uk/methodology-study/. We are keen to get responses to the papers, and have provided an opportunity for written comments on the papers to be submitted by email.... Read More »

The key research question is as follows: How does the artefact assemblage of small finds from Roman Richborough contribute to our understanding of the military site, its occupants, and the wider nature of the Roman military in the NW provinces of the empire? There is scope to develop the project according to the student’s particular interests for instance by focusing on particular methodological approaches or categories of material.... Read More »

Finds from Roman York, Brigantia and Beyond - Abstracts Published

We have now received the abstracts for our forthcoming conference. You can read them all here.... Read More »

A series of small grants are available from the Roman Finds Group to all fully paid-up members.... Read More »

The RFG is in the process of embarking on an exciting new project designed to act as an educational aid.... Read More »

A major Later Prehistoric Finds Group & Roman Finds Group conference in collaboration with the British Museum and including entry to the temporary exhibition. Full details and booking forms are now online.... Read More »

Grant to support the study of PAS finds from Cheshire

Chester Archaeological Society wishes to encourage the study and publication of objects (or groups/types of object) reported to the Portable Antiquities Scheme from Cheshire and adjoining areas, to ensure that their potential contribution to the understanding of the archaeology and history of the county is realised.... Read More »

RFG members have recently received a letter setting out options for additional future activities together with a copy of our draft constitution; comments on both are welcome.... Read More »

A Review of Our October 2014 Meeting at Manchester Museum

Click here to read a review of this meeting, written by Bryan Sitch... Read More »

The Journal of Roman Military Equipment Studies was the foremost medium for publishing Roman military equipment. Founding editor (and member and friend of RFG) Mike Bishop’s crowdfunding campaign to revive JRMES (and the newsletter Arma) has exceeded his target; all funds will contribute to future publications.... Read More »

The RFG is proud to be an organisational member of the Council for British Archaeology.... Read More »

The future delivery of archaeology services in Cheshire is currently under review and is open to public consultation, which is being carried out by an on-line-only questionnaire.... Read More »

Finds from the Roman North and Beyond

Following the success of last year’s Roman Finds Group session at TRAC, we are very pleased to sponsor a session this year on ‘Interdisciplinary Approaches to Roman Artefacts’.... Read More »

The Roman Society is trying to gather data on how it can better develop links with museums, local societies and schools. Please contribute your views via our online survey. Thanks!... Read More »

Date For Your Diary: Manchester Meeting on 8th October 2014

A date for your diaries. We are going ahead with arrangements for an exciting meeting in Manchester in the autumn and the date is now confirmed as Wednesday 8th October, (not as given in the last Lucerna).... Read More »

Classical scholars from the Cluster of Excellence “Religion and Politics” made an unusually large find of seals in an ancient sanctuary in Turkey.... Read More »

Online Course: Pompeii and the Cities of the Roman World

Sera Baker, who attended the RFG Meeting at the British Museum this year has sent details of a new course being run online by the University of Oxford.... Read More »

An altar has been discovered during recent excavations at Maryport, the first for 142 years. See the news story at http://www.bbc.co.uk/news/uk-england-19224154... Read More »

Catch our committee member Sally Worrell on ITV Secret Treasures this week! The programme, timed to coincide with this week's Festival of British Archaeology, features the top 50 finds made by members of the British public in the last 20 years, and runs on ITV1 for several evenings, culminating in an hour-long special on Sunday 22 July.... Read More »

A list of upcoming courses from the Society of Museum Archeologists.... Read More »

During this week-long course you will learn the basics of processing finds from archaeological excavations. Guided by nearly a dozen experienced practitioners and specialists, you will go through all the various stages from handling and packaging, to sorting and cataloguing.... Read More »

Another development which is worth saying something about is the Study Centre. This is located a short distance away from the main Museum site on New Oxford Street. The current projected date for completion is 2004... Read More »

On December 6th 2000 the Queen opened the Queen Elizabeth II Great Court after nearly three years of building work. The courtyard is vast, which is the first impression you get on entering, especially when you raise your eyes to Foster's domed glass roof.... Read More »

Could you contribute to Diggers' Forum?

Over at the Diggers' Forum we're relaunching our newsletter and we are planning on including factsheets and short informative pieces on subjects that are of interest to our membership.... Read More »

The RFG has been in crisis - you may have noticed the absence of meetings and a winter newsletter in 2010. Since the appeal in Lucerna 39 (September 2010), we have recruited several new committee members - thank you!... Read More »

Landward Research have been commissioned by the Higher Education Academy's History, Classics and Archaeology Subject Centre and English Heritage to conduct a survey of archaeological specialists.... Read More »

This latest edition in the English Heritage Guidelines series focuses on the identification, investigation and interpretation of glassworking evidence at sites in England from the Bronze Age until the 20th century.... Read More »

Please help us to make the Roman Finds Group even better!

Since 1988, the RFG has been a useful forum for everyone with an interest in Roman finds.... Read More »

Sorry, this event is now sold out. Click on the link above or visit the meetings page.